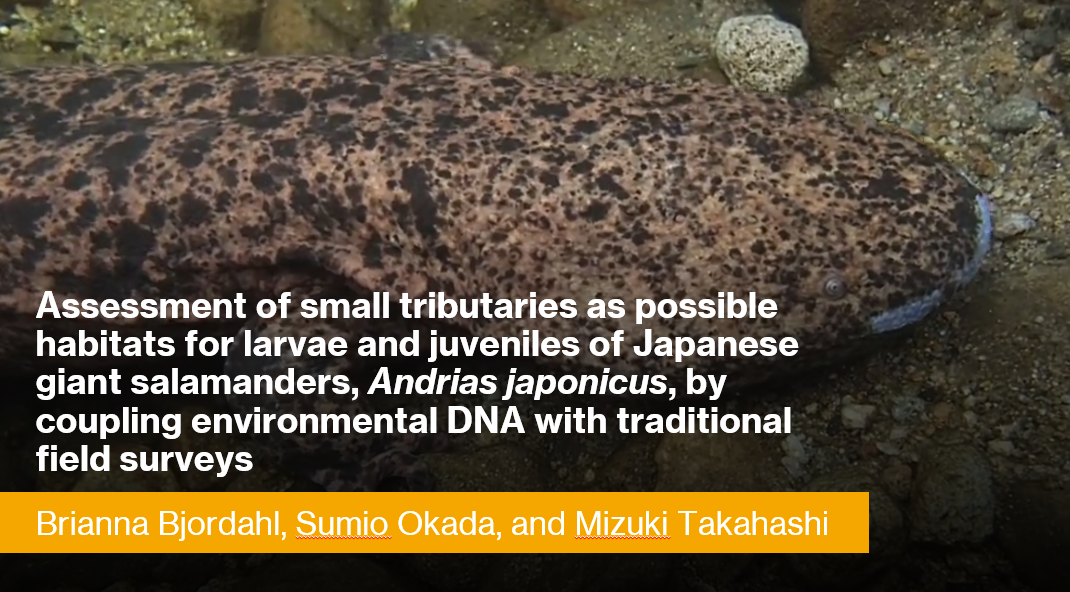 Demographic assessments of all four cryptobranchid salamander species have continued to indicate declines over the past several decades. One of the conservation challenges facing all cryptobranchid salamanders is the paucity of information about larvae and juveniles. Larvae and juveniles have only rarely been encountered during field surveys, even in streams where adults have commonly been found. In the case of the Japanese giant salamander (Andrias japonicus), several lines of evidence imply that larval and juvenile age classes use different habitats than adults such as small tributary streams, which have been overlooked by conservation monitoring surveys in Japan. We examined small tributary streams as possible habitats for young A. japonicus by integrating eDNA analysis with traditional field surveys. During the summer of 2018, we surveyed three first-to-third order tributaries of the Ichi River in Hyogo Prefecture, Japan, and collected water samples from each stream (Stream A: 465 m stretch, N=8; Stream B: 955 m stretch, N=21; Stream C: 2,331 m stretch, N=22) for eDNA analyses. Although no A. japonicus were observed during the eDNA water sampling, we repeatedly detected A. japonicus eDNA in all streams. Given this result, we conducted field surveys in the summer and fall of 2019, consisting of a daytime survey and a nighttime survey for each of the three streams. During the daytime surveys, we found no A. japonicus in Streams A and B, whereas in Stream C we found one larva, one juvenile, and one new nest with a large adult male actively guarding, from sampling sites that showed notably higher eDNA concentrations. During the nighttime surveys, we found five adults and one juvenile from Stream A, one adult from Stream B, and 13 adults from Stream C. These results suggest the importance of small tributary streams for A. japonicus, especially for smaller breeding adults and likely for larval and juvenile development. There are numerous previously unsurveyed small tributary streams throughout the range of A. japonicus. Our results suggest that the coupling of eDNA analysis with field surveys provides an efficient monitoring tool to examine those overlooked habitats, which would further emphasize the importance of including small tributaries in the conservation management of A. japonicus and potentially the other cryptobranchid salamanders.