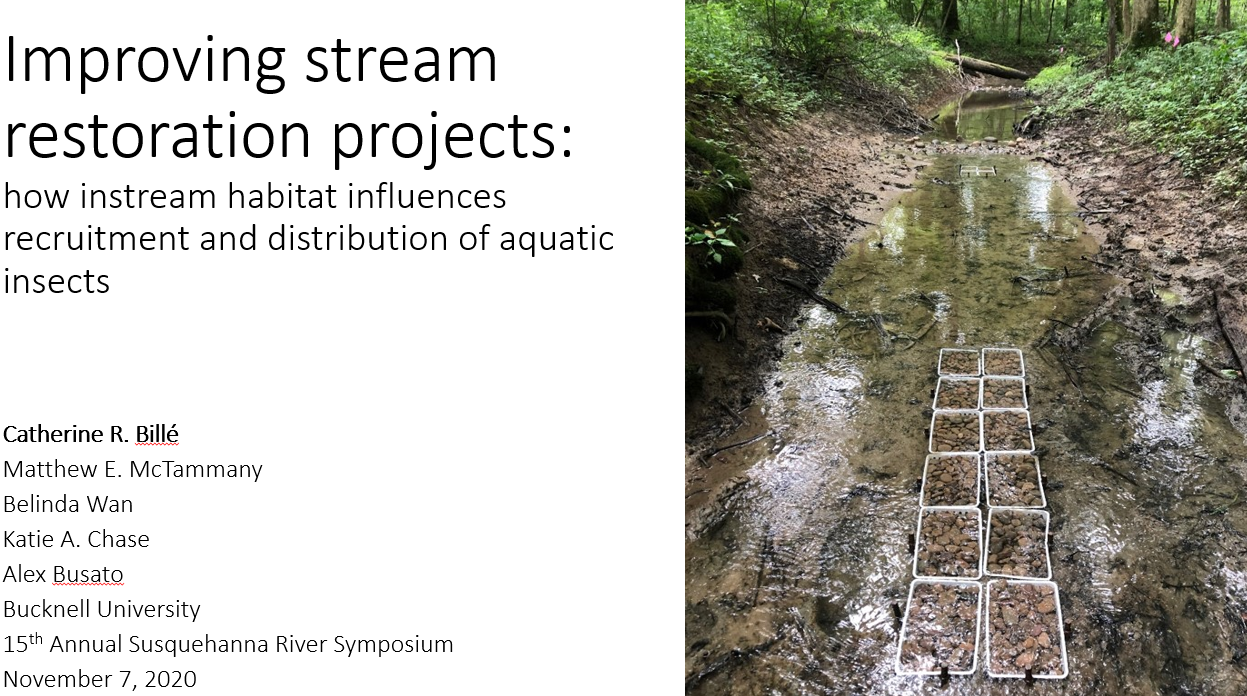 Aquatic insects have complex life cycles which often involve interactions with aquatic and terrestrial environments. Many insects rely on the presence of instream habitats, like riffles, to successfully complete multiple life stages. Riffles are particularly important for recruitment of insects that exclusively oviposit (lay eggs) on microhabitat like rocks or organic material. Riffles are also home to diverse larval communities that often serve as a source of individuals to proximal downstream habitat. We sought to investigate the extent to which instream habitat limits recruitment and community diversity of aquatic insects due to lack of suitable oviposition habitat and isolation of instream habitat patches.

To accomplish this, we constructed nine gravel and cobble riffles in a small central Pennsylvania stream previously lacking coarse inorganic and emergent substrate. These riffles were constructed in sets with different inter-riffle distances (15, 10, or 5 m) to determine if distance to upstream riffle and oviposition habitat affected downstream benthic invertebrate density. Benthic and drift samples were collected directly below each riffle and set of riffles every two weeks from September-October 2019. Riffles were also sampled for aquatic insect eggs, which were reared to adulthood in the lab. Composited Surber samples were also taken from constructed riffles and non-riffle habitat at the end of the experiment to compare community diversity between habitat types.

Initial results suggest that addition of emergent substrate increased insect recruitment to our stream, as 88% of egg masses were found on emergent rocks in riffles compared to 12% of egg masses on fully submerged rocks. Egg masses from Hydropsyche sp. (Trichoptera) and Chironomidae (Diptera) were found on both types of substrate, while Baetis sp. (Ephemeroptera) egg masses were only found on emergent rocks, which suggests that recruitment of taxa with selective oviposition behaviors could be limited by availability of emergent rock substrate. Additionally, larval insect densities were higher in reaches with riffles spaced 5 m apart (276.3 +/- 29.6) than in the control reach upstream of the constructed riffles (mean 113.7 +/- 7.6; ANOVA with Tukey’s pairwise comparison, p < 0.05). This study increased our knowledge of insect oviposition behavior and showed that providing oviposition and riffle habitat for aquatic insect taxa could improve recolonization and ecological recovery following restoration of habitat-limited streams. We suggest strategic riffle addition, including emergent substrate, as an augmentation of conventional structural restoration practices in streams.