Evaluating the Impact of Stream Restoration Techniques on Bank Erosion and Stream Morphology at an Unnamed Tributary of Pine Creek near Woodward, Central Pennsylvania 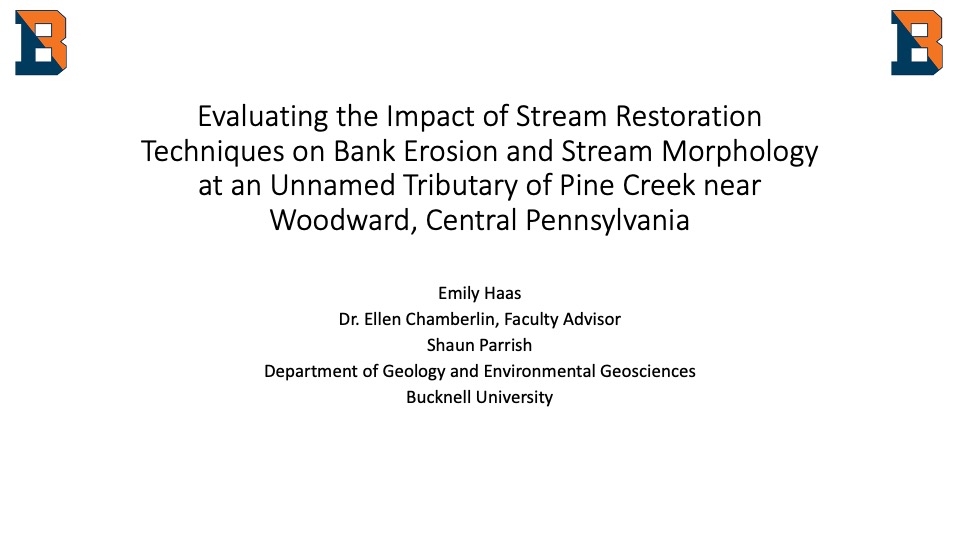 Soil bioengineering techniques are commonly used and effective in stream restoration projects in the United States. Live staking, specifically, is a soil bioengineering technique that is considered to be an economically viable and easy technique for stream restoration. Evaluations of restoration success rarely focus on the geomorphology of a stream, and commonly focus on the riparian ecosystem. This research project is investigating the impact of live staking on bank erosion and stream morphology in an unnamed tributary of Pine Creek near Woodward, Central Pennsylvania, approximately 20 miles west of Bucknell. This tributary has both
a restored section that has undergone live staking, and an unrestored section. It is also the subject of ongoing ecological studies by the Penn’s Valley Conservation Association (PVCA), but there have not yet been any studies implemented on the geomorphology of the tributary. For this research project, we are comparing the restored section to the unrestored section of the tributary to evaluate how live staking is affecting bank erosion, stream morphology, and soil organic matter (SOM). Field methods we are using include drone-based photogrammetry, surveying with a terrestrial LiDAR Scanner, high-resolution GPS data with a Trimble Real-Time Kinematic GPS unit, and soil sampling along the floodplain of the tributary using a soil
corer. Preliminary results suggest that the range of soil organic carbon in the floodplain soils is 0.5 to 2 percent. The soils are primarily a silty loam containing significant amounts of orange mottles and rootlets. The current state of the stream includes silt on the stream bed, undercut banks, and a very low current. This baseline data will be a fundamental part of a long-term study of the geomorphic processes acting in a bioengineered riparian ecosystem.