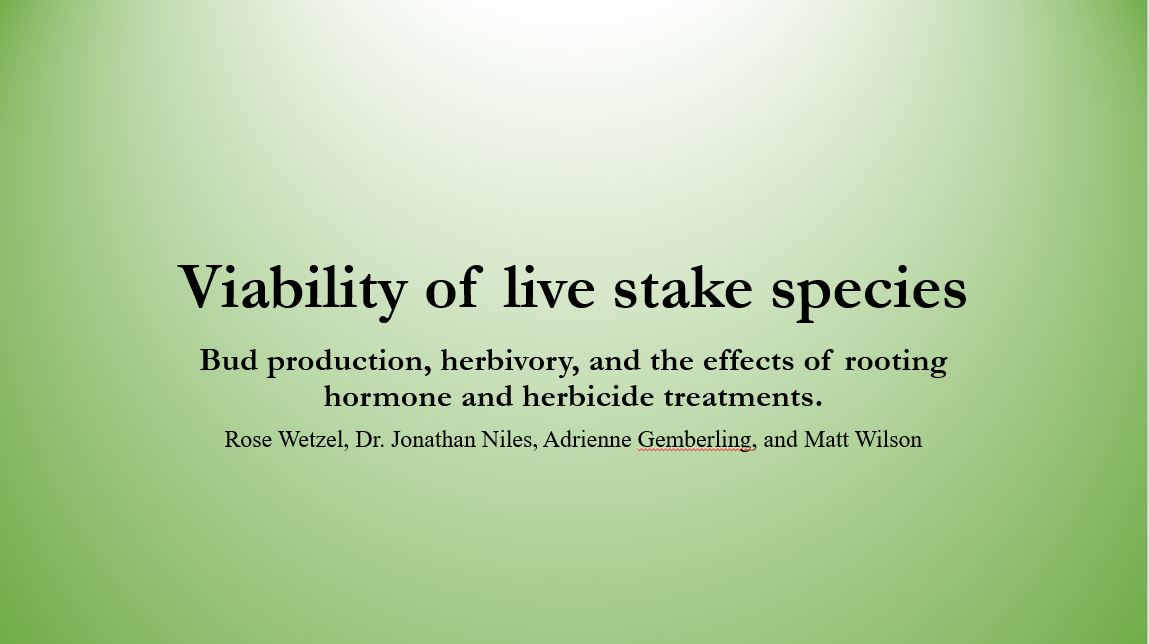 Live stakes are woody cuttings from wetland tree species that can root naturally when pounded into the ground. The use of live stakes in riparian and wetland restoration is becoming an increasingly popular technique because of its relatively low costs and maintenance requirements. However, the success of live stakes depends on species, environmental conditions, and planting conditions such as artificial rooting hormone or weed control strategies. The impact of such factors has not been widely studied, and much more research is available for western species and conditions than for those of eastern North America. We collected data in May 2020 using a common garden experiment with 1,550 stakes of nine native Pennsylvania species, where manipulated variables included the use of herbicide to control invasive species and rooting hormone to encourage root growth of stakes. Stakes were randomly blocked by species, and we examined what effect the use of herbicide, the use of rooting hormone, herbivory, presence of poison hemlock, species, stake diameter, and planting depth of stakes had on survival and number of buds produced. Our preliminary mixed effects model suggests that there is a positive relationship between stake diameter and number of buds and that when rooting hormone was used, stakes had more buds on average. It also suggests that most the species had similar high initial survival rates (>80%), except northern spicebush (57%), and that most species were consumed by herbivores at similar rates, except elderberry, which had more than twice the herbivory of any other species. When poison hemlock was present, stakes also had more buds on average. We hope to provide an analysis that will help conservation professionals gain insight into which local live stake species are most able to survive and quickly produce buds, and whether the use of rooting hormone or presence of poison hemlock impact survival or growth. Due to the global coronavirus pandemic, our site was not maintained this summer and is significantly overgrown. Therefore, we will repeat data collection in the coming months to identify which species are likely to have the greatest success at sites where maintenance is difficult or impossible.