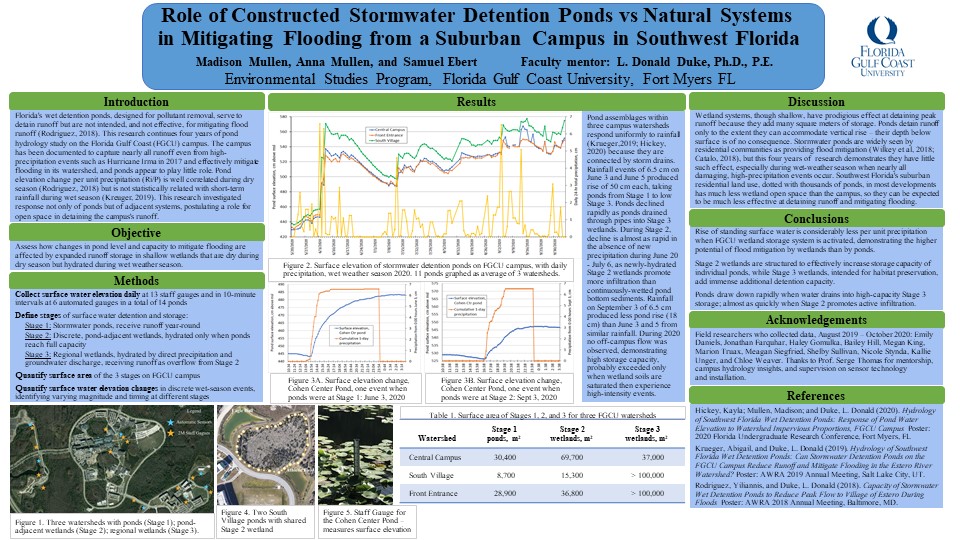 Florida regulations require residential and commercial developments to install stormwater detention ponds, for the purpose of reducing nutrient pollutants in runoff to receiving waters. The 800-acre main campus of Florida Gulf Coast University (FGCU), in southwest Florida, mitigates flooding not only with its ponds – 15 designed ponds, of an aggregate 17 acres – but with its 400 acres of open space, most of which contain functioning wetlands.
Stormwater ponds are widely seen by residential communities as providing flood mitigation (Catalo and Duke, 2018), but that is not a stated regulatory purpose and not an appreciable effect: previous research on FGCU ponds quantified a consistent elevation change with rainfall magnitude after dry-season storms (Rodriguez and Duke 2018) but no correlation with short-term precipitation during the wet season, when nearly all of southwest Florida’s potentially-damaging, high-precipitation events occur (Krueger and Duke 2019). This present research continues investigation of surface water elevation and precipitation, adding to the 4-year record of 24-hour interval data with automated sensors collecting data on 10-minute intervals. Quantitative results demonstrate the campus surface water responds differently during each of three stages. During Stage 1, encompassing the dry weather season, most runoff enters the 17 acres of ponds, which have enough capacity to capture all runoff from impervious surfaces. The campus enters Stage 2 when ponds spill over into adjacent wetlands, nearly tripling surface area and vastly increasing capacity to detain runoff: elevation per unit rainfall rose less than half as far as during a comparable rainfall event during dry season. When precipitation ceased, surface elevation declined rapidly during Stage 2, hypothesized to be driven by sorption into newly-hydrated soils and enhanced groundwater recharge from increased wetted surface area. Stage 3 is infrequently activated – when precipitation occurs atop standing water in Stage 2 – and storage increases another order of magnitude as constructed drains direct flow into nearly 300 acres of Stage 3 wetlands. Discharge from the campus, which occupies the top of the Estero River watershed, occurs only when intense precipitation occurs atop fully saturated, high-elevation Stage 3 conditions, as in Hurricane Irma in 2017; essentially zero water left campus during wet seasons in 2019 and 2020. Conclusions are
that surface water elevation rises considerably more per unit precipitation when only FGCU’s ponds are capturing runoff, and less when the wetland storage system is activated. Flooding is mitigated much more effectively by the wetlands than by stormwater detention ponds, as Stage 2 wetland geometry in effect increases storage capacity of individual ponds, while Stage 3 wetlands, intended for habitat preservation, add immense additional detention capacity. The wetlands also produce more rapid water level decline than ponds, so they recover to pre-flood capacity much more quickly than a system of ponds alone.
The research’s broader implications are that wetland systems, though shallow, have a prodigious effect at detaining peak runoff, because storage capacity is dominated by surface area rather than depth: ponds detain runoff only to the extent they can accommodate vertical rise, and their depth below surface is of no consequence. Southwest Florida’s suburban residential land use, dotted with thousands of ponds, in most developments have very little wetland open space (Wilkey et al, 2018), and consequently limited capacity to detain runoff and mitigate flooding.